Back to AWOLBush.com home page

Back from the front lines, the veterans listed below ran for Congress in 2006. Why were almost all the veterans coming home from Iraq running as Democrats?

And let's not forget the Coast Guard...

Complete list - members of the 106th Congress with Military Service. Why is the Republican leadership so top-heavy with Chickenhawks??

In response to NewsMax's "Deck of Weasels"...check out the Deck of Republican Chickenhawks!

Got other names to submit? Please let us know about heroes or chickenhawks, on either side of the aisle. (Hey, do your homework and include a link with any name you send us, OK?)

Re military personnel and public perception of Democrats v. Republicans in general.

How often must Democrats defend their party against the typical freeper blather of draft-dodging, service-evading, unpatriotic cowards among us? More often than we have to.

Gore was right all along. About some things. The "truth" IS on our side.

Or, as www.rackjite.com puts it:

THE CHICKENHAWKS "Conservatives make great fun of President Clinton for questioning the Vietnam War, standing up to his beliefs and questioning his own participation in that war as well, i.e., being honest and walking the walk of his own belief system [and then giving up his student deferment to subject himself to the draft!]. On the other hand there were literally millions of dishonest hypocritical, cowardly right-wing loonies who supported the war while refusing to personally participate."

In response to Newsmax's "Deck of Weasels"... check out the "Deck of Chickenhawks!" 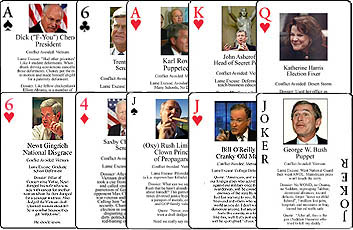 This site proudly hosted by